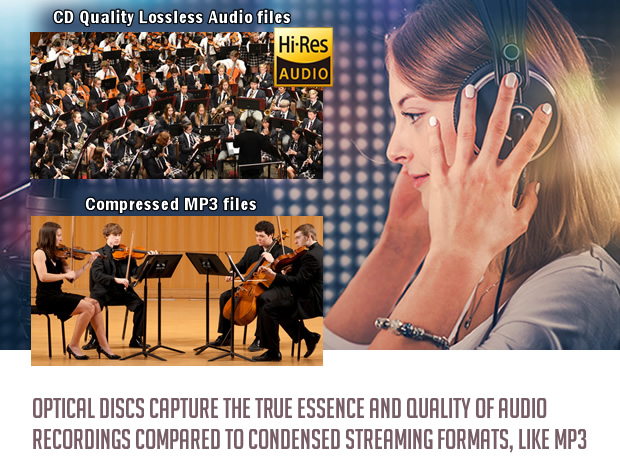 When the first CD’s were released for the masses in the early 1980’s, it was a revolution of sound. Never before could the full spectrum of sound be heard with such clarity and consistency. Audio CD’s were an immediate success and music customers were replacing their entire collections of records and tapes to enjoy the Lossless Audio quality only found on CD’s, nearly killing off the previous formats in the process.

Then, nearly 2 decades later, another digital revolution in music transpired, the ability to download music from the internet. Customers, often younger patrons with less disposable income that were upset at the perceived high cost of complete albums, which often only contained 1 or 2 songs they actually wanted, discovered they could “share” the music through file sharing sites like the defunct Napster. Eventually, many of these “free” file sharing sites were reigned in by the courts and the music industry fighting to maintain some semblance of control over the content they owned. This lead to the immergence of iTunes from Apple and the recognition people were willing to pay for streaming music if they had the power to purchase only the songs they wanted at a price they felt was reasonable. In order to make the music universally available, especially at a time when many were still using dialup internet service, the larger digital .WAV files had to be condensed to much smaller files, like an MP3, that could be downloaded faster for a majority of people. The sound quality was not as strong, but acceptable to most at the time.

Because .WAV files are often 90% larger than the traditional MP3 files, it limits the total number of songs one could fit on an “MP3” player. The rise of the MP3 lead to a whole generation of music lovers not experiencing the true sound of the music. Which is why, true audiophiles are resurrecting the older methods of recordings, like vinyl records, cassette tapes, and CD’s to hear the music in the original manner that the artists recorded and intended the music to be heard. As more and more people experience the true audio recordings in the original sound quality, they are coming around to demanding Lossless Audio formats like .WAC, flac, and others These larger capacity files are often not compatible with traditional “MP3” players or devices or take up too much capacity on user’s phones and tablets, so there’s a resurgence in owning and listening to music on CD’s.

If you care about the quality of sound and being able to truly enjoy the full resonance of the music you enjoy, try listening to the full spectrum of sound of lossless audio files as recorded onto a CD.

For more details of these or any products Vinpower offers, visit www.vinpowerdigital.com, or speak with a Vinpower representative in your area today.